It is great to get comments on my posts. Lately I got one via mail, which was very interesting, since it concerned one of the most intrigering drive systems: the NexxtDrive drive. I got a link to the Zemo-project from ZEG (pdf / language: german). Already in 2008 ZEG thought about checking out the NexxtDrive system. In the end they decided against it in favour for the Bosch system. The decision was based on a study, which claimed that the NexxtDrive system will never work properly. During my latest research I checked out a patent from F. Moeller for NexxtDrive from 2010 . The resulting drive system seems to be a very comfortable drive which integrates electric and muscle power – perfect for citybikes. It provides a variable transmission ratio and electric braking. 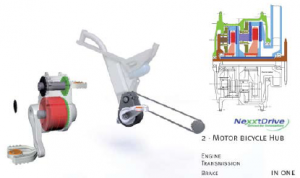 In the Go Pedelec Reader H. Neupert talked about upcoming drive systems. Like him I´m convinced one future option for the drives is to integrate muscle and electric power. The pedelec from Dolphin E-Bikes is still one of the best bikes on the market concerning performance. It reacts direct and powerful. Why? It works with a drive system which integrates both kind of power.