While digging deep in history of electric bicycles I brought up fascinating facts. The research gave me a more intimate understanding of how long technical developments need and under which conditions they get ready for a  market. I realized that they even need longer to be accepted and bought by customers. A good general overview over the history of electric bicycles is already written by Hannes Neupert in ExtraEnergy Magazin 03. My aim is here to line out some highlights, which attracted my attention. 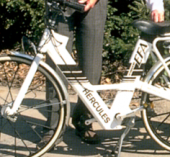 Beside all I made two interesting findings:
1. many technical developments, which are on the way to enter or just implemented into todays market,  were invented in the middle of the 90s or ealier.
2. some of these inventions are not yet integrated in the markets. They show a way in which the journey will go previously.

1982 E. Gelhard invented and patented the principle of the pedelec. Eight years later M. Kutter patented his EVO-Drive and won immediately a race with a prototype driven by his invention. In 1991 he came up with the first pedelec produced in small series. His vehicle was followed by the PAS from Yamaha. In 1993 they showed the first pedelec in mass production. Last but not least: In 1994  ITG Engineering GmbH leaded by a former MZ manager presented the first pedelec developed and produced in Germany – the Yoker. 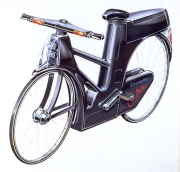 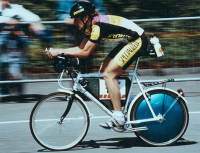 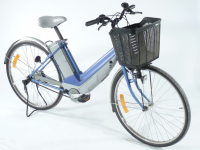 An interesting discover for me was: none of the players, who developed and produced pedelecs had roots in the traditional bike industry. Even if the vehicle is regarded as being a bicycle, power assisted but still it belongs to the same category. Checking the other forward looking developments I realized that nearly none of them was done by bicycle manufacturers. (paragraph reviewed, June 23rd)

The Umweltbundesamt Berlin financed a feasibility study by Hercules and other German manufacturers between 1985 -87. Beside others one result were 12 prototypes of an electric bicycle  – motor assisted, but no pedelecs. The project demonstrated what was possible concerning LEVs. Due to high development costs the vehicle didn’t go into production. Instead Hercules decided in favor for a simpler motor assisted bicycle, the „Electra Classic“. My attention was catched by the positioning of the batteries at the prototypes, as they were integrated in the frame. Both front tube and saddle tube were equipped with battery cells. The cells of the saddle tube were to take out via the saddle, A. Manthey a project manager told.

Immediately after the final report the project disappeared into the drawers. Only 2001 Sparta reviewed the theme and integrated cells in the front tube of  their very successful Ion pedelec. In 2010 the Swiss industrial design studio Flow  showed a study of a pedelec with a battery in the saddle tube. 2011 Fairly Bike and others started the production.

A lesson of how creating a successful product is the story of the „Flyer“. 1995 the firm BK Tech introduced a very innovative pedelec into the market: the Flyer. The complete vehicle was a new development: the drive, the frame, various components. The design was outstanding for its time and the company came along with a modern corporate design. Unfortunately the vehicle couldn’t fulfill the expectations of the customers perfectly. Sales were too low. In the end the firm was eaten up by the development costs of the project. In 2001 in became Biketec AG. One of the most innovative pedelecs left the stage.

Biketec AG learned from this mistakes: they focused on satisfying their target group needs and desires. Additionally they reduced production costs significantly by buying one of the most reliable drive kits of the market. A robust state-of-the-art-frame was build around the kit. A „reviewed“ vehicle was ready to start. The new marketing concept worked out fine: nower days the Flyer is the most successful bike of the European market. More than that: Biketec AG invested in continuous promotion of pedelecs and is one of the players, who is responsible for the success of the vehicles in general. The left-overs from the original idea are only the name and the logo.

2001 – during my first intense research focused on electric bicycles I looked around for alternative energy sources and unearthed the fuel cell. Already in 1995 an unknown constructor built a bike with a fuel cell. Until today I couldn´t find out if this vehicle ever rode around in the streets or not.

If this energy source is a competitive alternative compared with the battery is still questioned. But developments continue also in this field: since ca. 2003 Jörg Weigl devotes himself to this option. He created various prototypes in collaboration with Universiti Teknologi Malaysia. One working vehicle was shown in 2010 at Hannover Messe.

In 1995 H. Kutzke created the concept for his electronic bike. His vehicle comes with an electric power transmission and an all-wheel-drive. Both are controlled by a board computer, which is freely programmable.

Meanwhile E. Gehard could see his invention in action already ten years after filing his patent this concept still waits for realization. Why are the next steps not done yet? are the software and hardware advancements not extensive enough? Or are the manufacturers still too reserved? Is the nower-days-customer not ready to imagine himself riding around with a vehicle like that?